On Crop Circles, Phi, DaVinci, Cezanne and the "Golden Ratio"

The Golden ratio
From Wikipedia, the free encyclopedia

Shapes proportioned according to the golden ratio have long been considered aesthetically pleasing in Western cultures, and the golden ratio is still used frequently in art and design, suggesting a natural balance between symmetry and asymmetry. The ancient Pythagoreans, who defined numbers as expressions of ratios (and not as units as is common today), believed that reality is numerical and that the golden ratio expressed an underlying truth about existence.

So, about three years ago, I met with a client who had an idea for some shirts with crop circle graphics on the front. Oddly enough, I keep an idea diary, and had just developed a fascination for crop circles and the concept of the "golden ratio" as a sort of mathematical proof for good design. I actually showed him my notes, so that he would know that I wasn't just making up some strange coincidence just to develop a false sense of comraderie.

I am now revisiting that idea, since I watched a TV show on mathematics, and they presented the idea that when you strike a vessel filled with water, it produces a tone -- then, if you take an identical vessel, double the size and add double the quantity of water, it will create a complementary tone. So this idea of ratios and aesthetics applies to music as well. And, it seems, you don't have to know anything about music to know what is pleasing to the ear.

Of course beauty is in the eye of the beholder. There are all sorts of other reasons why we find things beautiful or pleasing. Sometimes, I think we emotionally respond to the beauty of something that is intentionally out of synch -- something that blatantly defies this notion of proportion. Like a wailing rock guitar riff, a Jackson Pollock... Chinese Opera, for example, is like nails on a chalkboard to me... But just maybe, on the most basic level, there is scientific proof for good, basic design and aesthetic balance? Perhaps all else is acquired taste?

So what does this have to do with clothing... Well, I am really curious about how people approach "fit". It seems that every person believes that they know what "fits", but if you define fit as neither too tight nor too loose, neither too short nor too long, and stays in place during activities, that would seem to define fit. But it doesn't... People have a wide variety of preferences, and it extends beyond what they can feel - they need to examine even the most comfortable garments in the mirror. People generally don't want garments that skim their bodies - they want garments that create a flattering silhouette, which may be quite different than the body shape the garment contains. So where does that aesthetic reference point come from? That is the question I am exploring.

Maybe fashion magazines, TV, movies, the influence of the general cultural mosaic creates a client's vision of ideal "fit"... Whatever it is, it is so specific, so current, so exact, that most people don't realize how many truly unique requirements they have. That is one of the reasons why this business is so endlessly fascinating. 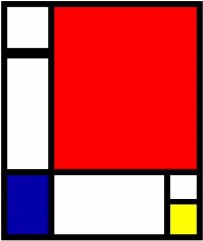 Okay, final strange thought - I didn't know that the artist Piet Mondrian was also thought to have used the golden ratio in his work. See the "what I'm working on" post in this blog. Is this why the dress appeals to me so?

Posted by mimi jackson at 11:33 AM No comments: