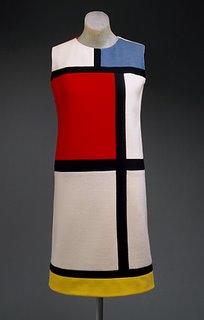 I'm working on a reproduction of this dress. It is such a specific look, but truly lovely. White boots or black ballerina flats would really make the look!
Posted by mimi jackson at 2:01 PM No comments:

Well, I had "tickets" to a taping of the Isaac Mizrahi show today. I arrived at the studio on West 36th Street this morning (a bit earlier than suggested, 10:10), and was told, after about 1/2 hour of waiting in below freezing weather, that they always overbook the show, and many of us would not be allowed in. Well, it was a shame, since I was asked to reconfirm not once, but TWICE that I would indeed be attending. No, I was not one of the TWO people from the general pool who actually got in...

This was the text of the email sent to me the day before...

"This email is just to remind you to please show up for your Isaac taping at 10:30AM. Our studio is located at...

Your name will be on a guest list, actual tickets have not been sent out. If your guests arrive late, we are sorry to say that we can not hold tickets if other audience members have arrived on time.

I have some people confirmed and others I do not. If you have not confirmed, it is NOT too late to confirm. All I need is an email saying, "Yes I still plan on attending the taping on 12/8 at 10:30AM."

I hope to see you all there. Have a great day!!!


What a dirty trick.

Note: Not only were the "tickets" not confirmed - whether or not this is standard for TV audiences, I don't know - the consolation prize was bogus as well. VIP tickets to a taping next season (if there is one...doubtful), or tickets to "The Daily Show", which are not a sure bet, either. Think I'm done with this talk show audience thing.

I feel silly for ranting about this - even sillier that I cared so much about seeing a taping of the show - it is FREE and on Cable TV for goodness sakes... okay, I'm over it...

The moral of the story is "Don't try to get into a taping of a talk show unles you've got plenty of time on your hands." The work I could have gotten done instead of standing in the cold... (sigh)

Back to work now.
Posted by mimi jackson at 9:17 PM No comments: 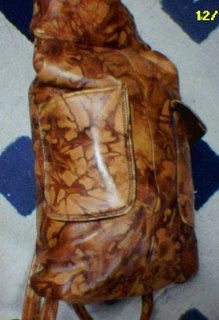 I would say this bag has a very handmade quality --which was actually what I was going for. I am very happy with the results. My bigger point is, because this is completely custom, this item is the manifestation of exactly what I want and appreciate in a bag. Assymetry, pockets sized for my stuff, can carry over my shoulder, but behind my arm, backpack-style... Because it is not mass produced, and will never be sold on a store shelf, it responds to no one else's requirements but my own. Here are pictures, if you're interested... 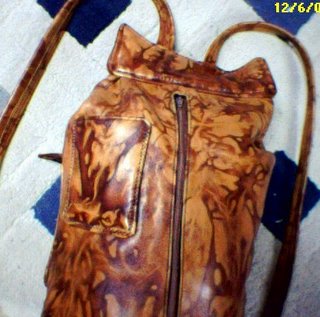 Posted by mimi jackson at 11:29 AM No comments:

Sewing for the Masses

What I do is specifically not fashion. By that, I mean that what is "in style" is irrelevant when I am working with an individual client. Even people who think they have no fashion sense have very specific and unique tastes.

Is everyone a potential customer? No - nor should they be. A custom item is about a very specific item at a very specific point in your life. Not that we should assign it too much importance - clothing is semi-disposable after all, but it is a real experience, a process, a project... Having a garment or accessory custom made is a unique and specific experience better saved for your life's special moments.

I am passionate about personal expression through clothing. It really is a form of communication.
Posted by mimi jackson at 2:52 PM No comments: 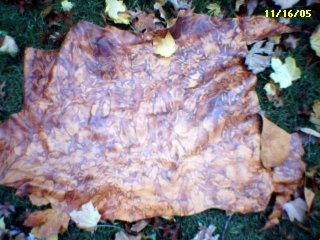 Lovely leather... It is becoming a bag to match my wallet, now that all of the design details are sorted out and the pattern is made - more to come... 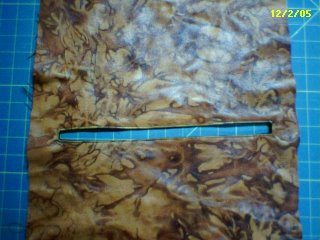 So, I cut it out and made a zipper slot - i decided to make a cylindrical bag - no hardware - why? I dunno - just thought I'd try it. I cut the lining a bit smaller, so I wouldn't put to much strain on the leather when I put things in it. 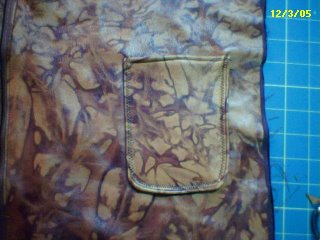 Added the zipper and pockets... 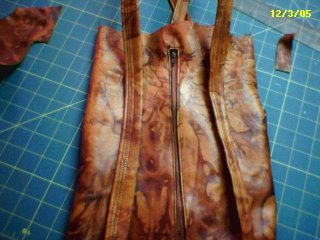